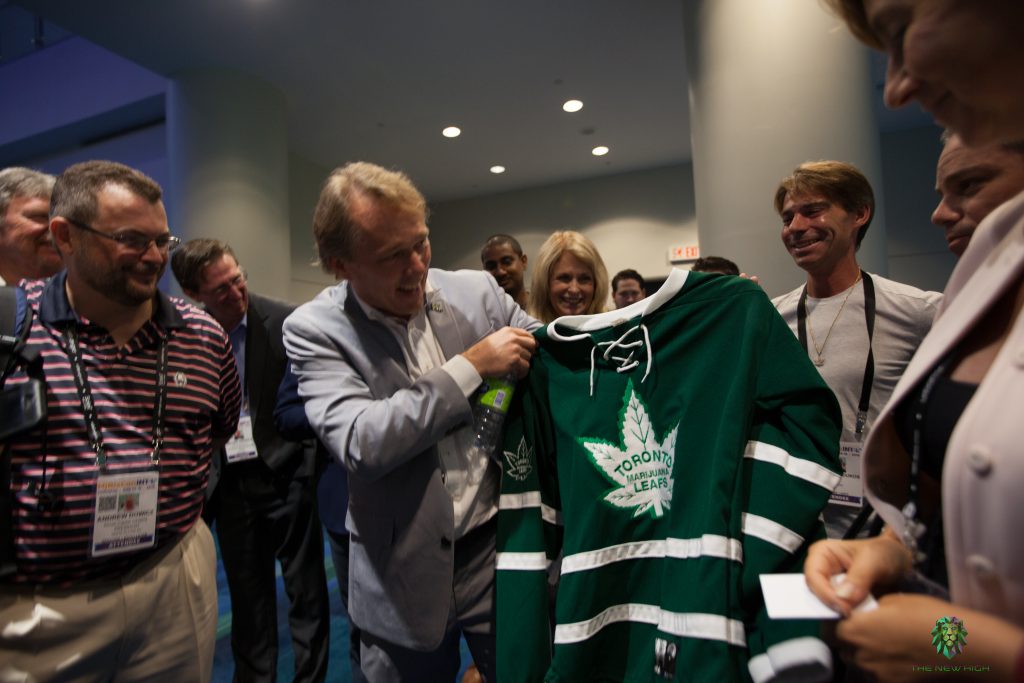 Mr. Linton is the founder of Canopy Growth Corporation (CGC) and co-founder of Tweed Marijuana Incorporated. Canopy Growth was the first cannabis producing company in North America to be listed on a major stock exchange (TSX, July 2016) and included on a major stock index (S&P/TSX Composite Index, March 2017). In May 2018 Canopy was also the first cannabis-producing company to list on another major stock exchange, the New York Stock Exchange. Bruce’s experience as a founder, CEO, and Board member across a wide variety of enterprises has influenced the positive start of Canopy Growth, which to date has enjoyed market support for capital raises of over $625 million including a $245 million investment by Fortune 500 beverage company, Constellation Brands (NYSE:STZ). ~via Canopy Growth

So let’s get this out of the way first: Have you ever smoked cannabis? /via @globeandmail

Yes, I have. It was when I was in university. I think, like many people, I’m not necessarily a fan of combusting things and inhaling the result. Rather than understanding what I was getting into, I jumped right in the deep end with people who consumed a lot of cannabis. The effect was that I became the entertainment for the next hour or two because I was disproportionately stoned compared to them. I give you that detail because I think a big part of the cohort who are going to be interested in cannabis in Canada may or may not have used it before, and they likely would prefer to get it from a stabilized, responsible supplier. We’ll call it a “moderate on-ramp” for them. You don’t want to try and pretend you’re Snoop Dogg because I believe, having hung out with Snoop now several times, he would have been just fine with the product that I used the first time, and I was not.

How often do you see Snoop Dogg?

He came out to Smiths Falls, Ont., recently. Smiths Falls is essentially three hours east of Toronto, one hour southwest of Ottawa, three hours west of Montreal, so in the middle of nowhere. Each year in order to appreciate the community, we put on a show on our front lawn. If you live outside the community you need to pay 20 bucks and we take all that money and dedicate it to creating a better community. The opening act is my two boys and their band, they’re the ripe old age of 15 and 17 now. Anyway, this year Snoop Dogg did a whole one-hour-plus set, and it was amazing. It was also amazing because this was in that town I described, which had also been really quite downtrodden by Hershey departing, as well as most of the other employers. So the town hadn’t had many really great things happen the last 15 years until a marijuana company occupied the biggest building and then ultimately brought Snoop to have a party on a front lawn and do a great set on a Saturday night.

The industry today is a crowded one. Who will succeed? ~Via EY

I believe the vast majority of participants in this market have a limited interest in actually creating a proper and sustained business. Principally, they are here because there’s no money left to be made promoting gold or oil. Only a handful are intending to be successful, long-term companies.

How long do you expect the black market to remain viable?

Frankly, buying cannabis from criminal sources is like buying moonshine or meat from an unsupervised processor. People don’t yet understand that illegal product often has contaminants like fecal coliform, produced by operators who don’t follow regulatory standards on things as basic as hand washing. So I think people are going to migrate from dirty old product to normalized product pretty quickly.